Polishing the beginning of a chapter

I've been posting fragments, glimpses. I continue to translate long interviews, and work them together. Here I'm working towards a real beginning of a chapter. This I put together last summer, August, in southern Sri Lanka, at an old Portuguese fort/ enclosed village on the Indian Ocean.

Tonight, I've been scraping off barnacles, honing sentence rhythms. It'll still need more, but it's what I've been doing that's fit to show. I am going back and forth for the title for the chapter. Either, "The Inside Joke" or "The Inside Joker." Votes welcome. This is intended to the beginning of a chapter. Here you go:

"This one is a Tibetan Monk, though he's in Bali here."


Gufu Watanabe, seeker of curiosities, is pointing to a little statuette of black clay that he has made recently. "And he's offering tea." Indeed, in the little man's hand is a miniature cup. "I call it 'Drink tea, then go.' " Well, actually, what Gufu said in Japanese is "I call it 'kissako'." It's a word I don't understand the meaning of, until I ask and he explains. "Few Japanese today would understand the term 'kissako.' " he says. "It's a Zen proverb, from a long time ago."


On the floor in front of us, arrayed around the little man, is a whole phantasmagorical statuary of vaguely smirking, blank-faced animals with wide circular eyes--all made from black clay--gathered as if in some hypnotized tropical consortium. A tiger, a hedgehog, a long triangular fish, a lizard, a bull, a turtle: the lot. Each piece has a little removable lid on its top, "In order to put peanuts--or something--in," he explains. 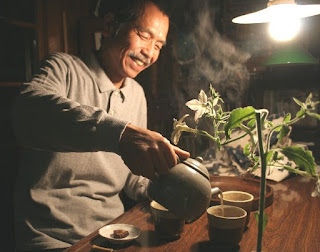 "Over them are some palm fronds," he says, gesturing with his fingers in the air above the animals. "Of course they aren't 'there,' here, but they're there. You know, because it's the tropics. Kind of strange that he's a Tibetan in Bali."


I smile to myself on his comment that this scene as an odd one, as though he had chanced upon it in a forest instead of having made it up entirely from his deeply-mulched imagination.


"Most Japanese people today don't know about 'kissako,' " he explains graciously, having become accustomed after many years to my endless reservoir (river) of questions. "It has two meanings. One, 'Don't be in such a rush.' Yes you can go on your way, but first, drink tea. And then you can go. "Also it means, whoever you are, you can drink here some tea, with other people, together, high or low caste. I offer you tea. In ancient Japan, this was, of course, not common. That's why it's a Zen proverb."


He then tells me about the lettering on the small platform (which also is a box) that the monk is standing upon. The words are in the script used to write Hindi, but the language is in Nepali on one side, and—phonetically--in Japanese on another.


None of this would I have found out from this elfin man with the very short goatee if I had not persisted in my questions, one after another. I rather doubt anybody else has kept at it long enough to get this whole story, either. But, like the invisible palm fronds around this potlatch of mythical creatures, it is definitely all "there." He has made the entire story up--and just for himself. He's not unwilling to share the story of this imaginary bestiary with any other person, it just that doing so isn't important to him, one way or the other. He enjoys his own mind and imagination: the pleasure is his own. And unlike me, he doesn't seem to need even a splinter of recognition.


By now, I am pretty well certain of this because I've known Gufu for fifteen years. He's interested in the interesting. Period. And that's a fascinating way to live.