Do they speak about a coming apocalypse?

An audience member at the Berkeley Ecology Center reading asked me this question: “Do the people that you wrote about in your book talk in an apocalyptic way about the future, about global warming and an impending world disaster?”
I should start by saying that I didn’t put my questions to them in this way, and it certainly wasn’t the frame which they put around their own choices and ways of living.  There are a few times when the topic has come up.  Just recently, after the book had been out for a couple of months, Atsuko (Chapter 3) did say something to me about it, in her plain way of speaking,  when we were talking about how many people will be reading A Different Kind of Luxury.
“It will be a few years before the value of your book will become perceptible to people.”  She didn’t elaborate, and I think I will chose not to either.
San Oizumi, in Chapter 1, also speaks about this: 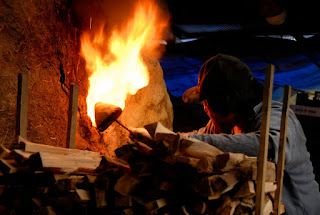 “We all live with contradictions.  You have to decide which contradictions you can abide with and which you can not.  For me what cannot be tolerated are the things that threaten the kiseki of life itself."

I pull out my pocket dictionary to look up the unknown word.  The definition, in tiny letters on the small page, reads "miracle."

"A miracle is something that just cannot be explained rationally.  It is the impossible thing which could not be.  If you think about it, isn't it really impossibly unlikely that we are alive?   What explanation is there?  It is completely illogical. And it is a miracle that we are all still alive with what the Bush people in the US are doing, and the other countries too.  The contradiction that I cannot abide with is the way they are ruining the gene code.  The genes of my children will be destroyed by radioactive waste dumping and atomic energy.  If we destroy the gene code we cannot pass on this miracle to our children.”

It seems to me that Oizumi sees the world as both perilous and miraculous, yet he keeps doing his tea ceremonies--for him a way to remember beauty sitting on top of a lot of danger-- and at the same time he continues with his work against war and his anti-nuclear activism.
But perhaps the most direct approach to this question came in a discussion I had with Osamu Nakamura (profiled in Chapter 2), but it was something I did not put in the book. Nakamura was (as usual) very precise and logical.  He put it like this, “Well, we who are alive today are using more resources than actually exist, and there are more and more people doing it.  So at some point, it will become impossible to keep using this many resources, and the current system will break down.”
As he’s speaking, his manner is very clear and unemotional, with a simple, “stating a fact” tone.  He’s not rattling a saber or being gloomy or offering a stern warning.  His attitude is more: let’s look at the reality.
He  continues, “It’s not a question of if  this breakdown will happen, but the question is when it will happen.”  (Nakamura was in his late fifties when he was talking to me about this, and I was in my early forties.)  “Will I be able to live out my life?  Perhaps ... in fact, probably.  Will you Andy?  That’s not sure.  Maybe around the end of your life?  Atsuko’s children Junko and Shoko, probably they’ll have to experience ‘it’, what ever it is.” 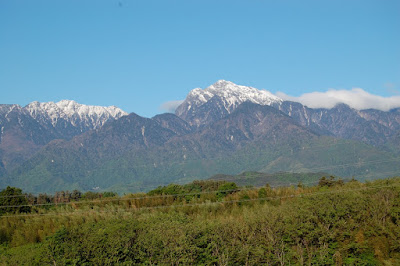 I’ll close by offering my own opinion here, not something spoken by the people in the book: Do we really want to make good choices in our lives--choices to be closer to nature, to not waste the precious things we’ve been given, to respect the earth and to respect our own lives by living well--do we want to make these choices because of a sword hanging over our heads?  Do we want to say, “I’ll have to change because of the terrible (apocalyptic) consequence if I don’t?”
First of all, that’s not such a pleasant way to live, always in fear.  Also, our brains are so small in relation to the hugeness of the world.  No matter how much we study, we really don’t know what will happen.  Predicting is so notoriously difficult.
The real answer, I think, and one thing that came through for me in writing this book, is that living intentionally is good in itself.  It feels good, and it produces a better life.  It feels better to making things with your hands than it does to purchase them, or to push a button to get them.  It’s much more rich and satisfying to become intimate with nature than to be alienated from it.  It’s a great life to just have time to think, and to use less.  That is its own satisfaction.
And it doesn’t depend on being right or wrong later.
Posted by Andy Couturier