Saved some of the best for the end... 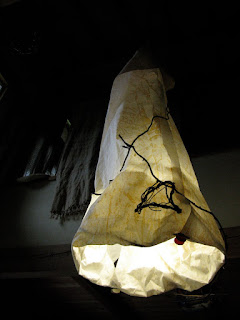 Last week we visited Masanori and Wakako Oe, who I wrote about in Chapters 11 and 7.  (Have you read Chapter 11 yet?  Even my publisher commented, "That one was really a mind blower."  I'd love to have your comments, too, and I'll post them on the blog).

Now the work of writing is done: all the interviews and translations of passages from his many books, finding the meanings in each of them, putting them together into a chapter of meanings, something to give over to others.

I put this chapter last in the book to give it pride of place, knowing too, that inevitably some people might not make it all the way there.  You can jump straight to it, if you'd like.  In one of the last scenes from that chapter--which Masanori commented on when I just visited him--is that of him being by his father's bedside as he was dying, "and then the barely perceptible change in his form" as he put it in his own book was as of snow dancing, not really falling anywhere, because there's nowhere for life to fall. It's just life everywhere around.

This time, my partner Cynthia and I arrived at their place just at rice planting time.  In their broad rice paddy, we took two rice seedlings at a time into our fingers, inserting them deep into the rich mud.  Looking down into the water, it teemed with so much life! Tadpoles of course, but so many other tiny living creatures, little wiggling spiraling worms, and water bugs, and so so many of them. 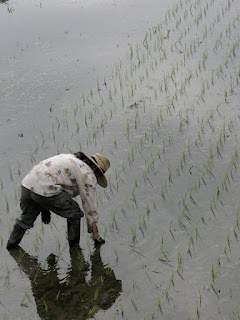 The Oes practice "nature farming" which has two precepts I'll share with you: one: take nothing out, bring nothing in, and the second: don't cultivate the soil.  No digging.  So below the water are mosses and rotting straw, and last years rice plant roots and cut stems, all supporting the life of the rice paddy now.  I felt very much in the midst of Life.  Then, switching my view, I could see the water surface full of reflected clouds, puffy and white over the green rolling mountains.

Of course, there were so many other things to notice, being with the two of them for a few days.  Wakako made this condiment of boiled kombu seaweed with little "sansho" peppercorns, which we ate with rice.  Black and salty and piquant.  Then there was the laughter at how many new vine sculptures Wakako has made, decorating every surface and hanging from every rafter: baskets and weavings and flower vases and light shades and caligraphy hangings echoing the snaking viney shapes.  "I have to stop before Masanori feels too much like he's living in the middle of a jungle!"  Masanori hunches his shoulders, smiling only slightly, like he really does worry that the whole house will be taken over by vinery.  (More about Wakako's philosophy of vine sculpture in Chapter 7....)

Out behind their house, I was shown also their biogas production experiment, which runs off their toilet, and I was really happy to see that Masanori's next book was going to be on the topic of myths, which I had spoken to him about, and had gotten some information about for the research on the book, but have much more to learn about from him.

In any case, this little "blog" thing is just an enticement, as these offhand musings are mere decorative flourishings on the Real Work, the book in itself. I spent years shaping it, and I hope you can find in it some of what I have: people who've truly figured out how to live this life well.
Posted by Andy Couturier