Oizumi himself asks: “Why did you put the chapter about me first?” (includes new excerpt!) 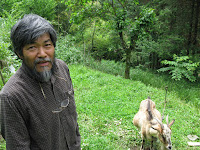 It was a hard decision, actually, and one recommended by my editor at Stone Bridge Press.  At first I thought that with his brusque manner, his anarchism, and his un-padded statements, the chapter about him might give people the idea that the book was more hard edged that it really is.
But I became convinced that the editor at the press was right.   (I had considered starting with the chapter about Murata, or the one about Atsuko). I decided based on a number of things, including how he’s funny, and the range of his accomplishments, and how he lives in such an interesting place, and makes such fabulous pottery.  Also, really important to me was that the way the chapter starts answers the potential objection--before we even get started--that this way of living is some kind of hobby or fad for middle class or rich people. Oizumi grew up poor in the slums.
But the clincher for me was that with the beautiful photos on the cover and inside, with the glowing jacket blurb text, and the general positive feel of the outside of the book, it would be easy for people to assume, wrongly, that this was a book that didn't grapple with the real world--the real world of nuclear power accidents, slums, electricity use run amok, racial tensions and war.  Oizumi looks at all of them, straight on, and tries to make the world a better place.  (He’s got time to do that, I should mention, because of the way he has set up his life, and because of his attitude toward consumption.)
So I’d like to give you another excerpt from the book, and I hope you enjoy it.


“I was raised in the slums,” San Oizumi tells me as we sit in the cozy central room of his large, rambling, mud-walled farmhouse. “There in the tenements was a world that I could never have dreamed of before we had to move there . . . so many people living right on top of each other: sick and broken people, the mentally handicapped, prostitutes. As a fourth-grade boy,” he admits, “it was kind of exciting. I even heard about a neighbor woman who killed her husband, crazy with jealousy. It was quite an education for an elementary school student.” He smiles slightly and raises one eyebrow. “But,” he says, now serious again, “because I grew up as a poor person, surrounded by poor people, I learned a lot about the distortions and sickness that lie at the foundations of our society. I don’t have any illusions about what it’s really all about.”
Such statements are typical of the broad-shouldered potter with the unhurried voice. Although he offers his insights with seeming indifference, when Oizumi looks at me, he’s all serious attention. It’s not a glare but it’s more than a gaze, and it always has a strong element of concern to it. Although Oizumi can at times come off as gruff and brusque, I never feel that I am speaking about something trifling with him. This has the effect of making me really consider my words and try to speak from a deeper, more serious place in myself.
I had come to meet him originally because I had heard of his old-style wood-burning pottery kiln of mud and clay and of his organizing against a high-level nuclear waste dump planned for his rural district. After meeting at tonight’s gathering of citizens’ groups opposed to the dump, we’ve come back to his house. Sitting around the huge wood-slab table he has made, with pieces of his luminous pottery all around us, we drink tea and talk into the night.
Oizumi tells me of his upbringing and of his father. “Dad was a poet and woodblock carver,” Oizumi says in his thick working-class accent. “But you can’t make much money writing poems,” he laughs, “so we were very poor. When I was a very young child, before we moved to the slums, we had a house in a small village. The other villagers were very suspicious of my father because he had a record by Beethoven, and they could see by the letters on the album that it was clearly foreign, so they thought he was collaborating with the enemy Americans.” This suspicion was corroborated for them because Oizumi’s father could speak a little English and refused to go into the army.
“He didn’t want to have anything to do with people in the business of killing,” says Oizumi in his matter-of-fact way, “and as a result, the village elders shunned him and the other members of our family. But when Japan lost the war and the U.S. Occupation forces arrived in the village, there was no one else but my dad to translate. The same village elders who had ostracized him came begging at his door to ask for his help. But he didn’t want to help the Americans either: in his eyes, they were murderers just the same.” A few years later the family was forced to move to a tenement building in Sendai, an industrial city in cold northern Japan. The old man died from tuberculosis when Oizumi was only in sixth grade.
Like his father, Oizumi is willing to make decisions entirely on principle, and he too is perfectly willing to suffer the consequences of his actions. “Growing up in poverty,” he tells me now in his calm, slow voice, taking a sip of tea, “I learned that even if I have very little money, that’s not the end of my life. I know I can still have an interesting life without it. I don’t want to be someone who is completely reliant on money, someone who is used by money. That’s why I neither borrow nor lend.”
The hard-edged world of the slums he grew up in seems such a contrast with the antiqued beauty of this two-hundred-year-old house—with its massive handhewn timber rafters, mustard-colored walls, and beautiful tansu cabinets—where he lives with his wife and three children today...
[continued, in the book!]
Posted by Andy Couturier