"Training to be talentless" The totemic interior world of Gufu Watanabe

It is as if Gufu is harvesting the world of all its amazing variety, amassing thousands of bits and pieces and storing them, either in his sketch book, in his garden or in his mind.
Gufu draws much of his inspiration for his pottery from the art of Asian tribal minorities.
"There's an odd humor to it, a strangeness" he says.  "It's as if the art itself doesn't care a damn about you.  It's not trying to attach itself to you, to say 'Please buy me and take me home.'
"Many craftspeople in Japan can achieve works of incredible refinement, but I find much of it uninteresting.  I want to make things that are artless, with rough, strange, childlike lines.  That's why I'm trying to train myself to be without technique, to be talentless. But I find it almost impossible to do." Watanabe is particularly inspired by the totemic animalfigures and religious items of tribal peoples of Persia and the Dekkan Plateau in South India.  "Their art doesn't reek of human interpretation," he says.  "Somehow it's distanced from the human character, impersonal. Their figures are almost expressionless,
but not quite.  I find that very fascinating." 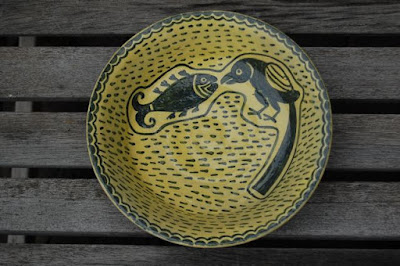 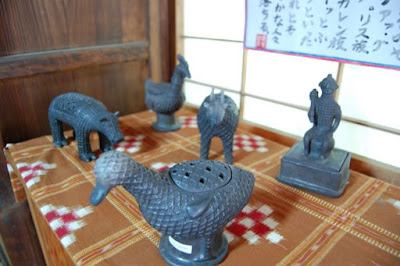