"They are very close to building a new plant here"

Japan is rife  nuclear power stations, and many more are being planned and built.  (Obama by the way just signed a nuclear deal with Chile to build power plants.)  I received an email from a expatriate who is living in Japan who is fighting nuclear power in his local area.  I want to share this with you so that you can understand the concrete difficulties in opposing a power plant (read on to see what I mean.)  I also want to share an excerpt from my good friend Kai's posting about his experience in Tokyo.  I urge you to read to the end where Kai talks about what we can actually learn from what's happening, and what and how we will need to change.  First Brett's email.


Hey Andy,
I just read and enjoyed your piece on your blog. it's getting quite scary here in Japan. We're far south (Miyazaki) of the damage but the damage doesn't look like it will stop anytime soon.  Regarding nuclear plants, down in Kagoshima they are very close to building a new plant in the remote area of Kushima. Residents resisted the plant for years but now it seems that Kyushu Electric [Power Company] has put enough money into everyones pockets to buy their support. There is a small movement resisting the effort but these people (me included) all live outside the immediate area. Next month is the final voting on the approval of the new plant. A group tried to organize an event/protest within Kushima but were blocked from renting/using any public spaces. so now there is an event planned for next month in a nearby area. Most of the protesters would qualify as hippies and surfers so the general public really isn't listening to them.

But I'm hoping this latest catastrophe in Fukushima will bring a change of heart to the Kushima residents. Japan's future is not looking good at all. this disaster is bigger than anyone can imagine. what a tragedy....
[A few days later]
Since i wrote you i've learned that the vote in Kushima concerning the nuclear plant has been postponed (for obvious reasons).  Also, the space that people had reserved to hold a protest event has since changed their minds and will no longer host the event.  It seems they were pressured by Kushima residents upset/concerned about the attention. After all the tragedies here in Japan i'm hoping that theJjapanese (and the rest of the world) begin to seriously question their relationship with nuclear power.  The stakes can't get any higher.


This is from my friend Kai's blog.  He's just left Tokyo.  Kai's blog is http://livingpermaculture.blogspot.com

A little more about life in a time of crisis. We finally decided to leave Tokyo and the "fun-house" that shakes constantly. More than the fear of being irradiated, it was the psychological impact of instability from the frequent aftershocks that solidified out decision. My partner is suffering from a sense of guilt, as if she "abandoned" those less fortunate. I think that is probably a relatively common feeling for those who evacuated. Its a tough situation.
3/11 was the original big earthquake (M9).  We have had aftershocks several times a day since then. On 3/15, we had another earthquake (M6.4) from a different area. Supposedly, the two events are geologically unrelated. There is also a general expectation that a substantial earthquake will hit Tokyo imminently. That's a scary thought.
There was a report that many people are suffering from earthquake-sickness. I think that is what we were experiencing. The earth feels like its constantly shaking, and its hard to think clearly.
ENERGY
Planned blackouts continue throughout the region (this includes traffic signals and trains). Individuals and businesses have to plan the day accordingly, and there have already been cases of people stuck in elevators. It's an important opportunity for modern people to become aware of how dependent our lives are on centralized electricity, and how vulnerable it is to disruption.
Remember the Northeast blackout of 2003?  It was supposedly triggered by powerlines coming into contact with overgrown trees, over 100 power plants shut down affecting millions of people from Ontario to Midwest and Northeast USA. When will we learn?
MEDIA
Recently, the media has started to include non-earthquake related stories. For a while, it was all earthquake devastation, nukes, and economic disruption. Now they have stories such as a planned execution of a criminal, the 634m Tokyo Skytree is almost complete, baseball games will have delays (oh, baseball disruption is actually earthquake related). Anime and variety shows have resumed their usual entertainment roles. Still, most of the media is focused on the aftermath of the devastation, stories of heroism and misery, and most of the airtime is dedicated to the current state of the nuclear disaster. I'm not sure how beneficial it is to have the news on constantly. On the one hand, we all want to know what is going on, whether things are getting worse, what we need to do in order to protect ourselves, etc. At the same time the psychological toll is not light. People are fed unpleasant news non-stop, similar to post 9/11.
It is also difficult as a media consumer to know who to believe. Its hard to believe Tepco [Tokyo Electric Power] (as they have been caught lying, deceiving, and covering things up) and the government (same charges, and they are getting their info from the news!). But, the media is also an industry, that needs to tell us something even if they have nothing really to inform us about. As a business, they need to keep our attention on their channel. Thats where "if it bleeds it leads" strategy comes in. Today, a Tepco representative was telling the media as little as they can as usual, and a reporter was persistently pushing the representative to give us some kind of worst case scenario. I don't feel either party had the citizen's best interest in mind.
STORES
Some stores have closed for a few days, some stores have closed early, many are out of essential supplies. Toilet paper, rice, bread, milk, canned goods, bottled water, gas, are hard to come by. This is what it looked like in my neighborhood in Tokyo a few days ago, 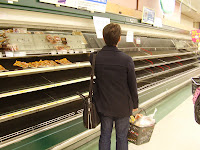 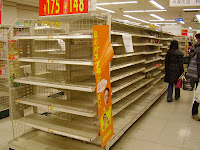 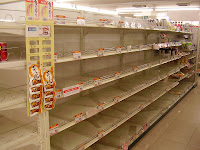 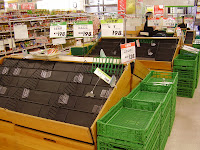 This is what it looks like in the global center of abundance. Perhaps more than actual need, these shelves were emptied by hoarding. I heard that iodine medicine to protect the body from radiation poisoning is also facing temporary shortages.
NUCLEAR DISASTER
This is the most man-made part of this disaster. It was waiting to happen. If not in Fukushima, then some other nuclear plant in Japan, or in some other country.
Nuclear energy is promoted as if it is clean, cheap, and safe. But, if you really understand the entire process, from mining, construction, and decommissioning including radioactive waste storage, the history, and complexities in safety, it is not clean, cheap, or safe. Thats a fantasy.
What it is, is energy dense. Fossil fuels are also energy dense. The unfortunate reality is that we have sacrificed human lives, democracy, safety and security, and peace for these concentrated forms of power. Both are non-renewable resources too, meaning we will run out of it. Technology will not solve our energy problems, it can delay the consequences and keep us distracted, the only real solution to our relationship to energy is to use less of it.  Either we choose to do it, or it will be forced on us.
I hope this was a shocking wakeup call to everybody about the nature of nuclear power and the disproportionate risks we take for our lavish energy use. I was with Mayumi Oda (artist, environmentalist, nuclear abolition activist) when the earthquake first hit, and we were talking about how this is the time to really put an end to this madness. If we don't get it now, after 3 mile island, after Chernobyl, then we will pay greatly in the future. Slowly we will forget, get distracted with our daily life, and be surprised when another disaster happens. There is no way to eliminate the potential for computer malfunction, human error, unexpected natural disaster, or terrorism. That is the same for most forms of energy production, but nuclear is the highest risk and life-cycle cost.
The only way to stop nuclear disasters is if we stop it. Our energy situation is quite complicated.  As we deal with the convergence of climate change and peak oil,there will be no easy solutions. Renewables have their downsides too, and most likely cannot produce the amount of energy we have become accustomed to. We can choose the path of a graceful decent, or we can head for collapse. For an intelligent overview and analysis of energy, and realistic steps we can take, I highly recommend (click for more info):
The Party's Over -Richard Heinberg
The Upside of Down -Thomas Homer Dixon
Transition Town Handbook - Rob Hopkins
If this event has not inspired you to action, please at least learn about risks and realities of nuclear power, and our energy situation. It will really change your understanding of our world. Plus its interesting stuff!
The nuclear disaster is timely in Japan because in a different prefecture, they started construction of a new nuclear power plant in a biodiversity hotspot. There have been persistant local protests that delayed the construction for over a year. Very little media has covered this situation, and I imagine most Japanese don't know that it is even happening.
Its hard to care about things that don't seem to directly affect your life. The link below is an overview of the situation
http://cop10.org/issues/marine/73-kaminoseki
Here is another site with a link to a petition
http://en.parc-jp.org/news/news/stop-the-reclamation-for-the-nuclear-power-station-support-the-people-of-iwai-jima-island
Recently, a Japanese documentary on energy was released which included this situation.

http://888earth.net/index.html
Lets create a new era,
where we respect life and each other.
A safe and stable world for ourselves and children.
Lets enjoy a life of inner fulfillment,
and minimal consumption.
A life where less is all we need to be happy.
Posted by Andy Couturier