What we don’t need

Nakamura doesn’t use any dishwashing soap.  At all, for any reason. I found it hard to believe when he first told me, but it’s true.   For those pots and plates and cups that didn’t have anything oily on them, he uses plain water.  For oily things, he mixes the water with sifted wood ash from the fire.  That’s it.
I should mention that he washes all his dishes immediately after he finishes eating.  He uses a vegetable bristle brush.  Oh, and he doesn’t eat any meat. 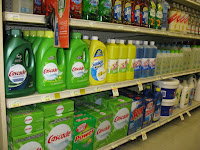 Since I was a child, I have always washed the dishes with dishwashing soap.  If I were to calculate all the meals I’ve eaten in more than four decades, I’ve used an ocean of detergent! Think about all the supermarket aisles full of different brands, colors, fragrances ... and think also of all  the plastic bottles.
Multiply each year you have been alive by 365, multiply each day by 3 meals, and think of each cup and plate and frying pan and bowl and each one squirted with ... with what?  What is in that stuff?

I once knew a truck driver, a guy who drove eighteen-wheelers.  He said the most dangerous and toxic loads he transported were the chemicals used to make dishwashing and other detergents.  He told me tales of when these trucks crash--which of course they do occasionally.  He told me of the  the poisoning of the nearby creeks and the liquid all over the road.  He also said, “You better get out of there quick if you are in the cab.  If that stuff gets on your skin, it can corrode it away. Lots of guys have died from getting those chemicals on their skin. 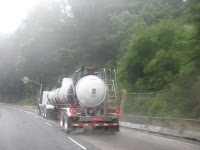 Now think again of the aisles in the supermarket, and all the detergent we have all used. We’ve been convinced we need this stuff to stay healthy and to be “clean.”  But, as Nakamura has shown me, we don’t need at all.
But this is just one example of something we’ve been told that we need.
Example two: When I was visiting Atsuko last year, I noticed she measured the cold water she poured into the tea kettle before boiling it.  I asked her why, and she said she didn’t want to waste the gas to boil more water than she needed.
I think of all the times I have happhazardly filled up my tea kettle with far more than I needed for my one or two cups of tea.  I didn’t even give it a thought.  But, even though I don’t think about it, if I do that tens of thousands of times over my lifetime--heating up twice as much water as I need-- I am spewing an enormous amount of carbon into the air.
Now think about oil and gas exploration, drilling and transport, and about all the lives lost, human and animal, from it.  And the wars: Nigeria, Iraq, the Exxon Valdeez, the Gulf of Mexico, and think of how much of it was just not necessary.
So what to do?  First we need to know it’s possible to wash dishes without detergent, or that someone in this world measures water before they boil it.  And then we have to exercise our will to change our behavior.  And then--really important-- we have to keep it up.
I know that what I'm speaking about is more trouble sometimes.  But so is working in a cubicle for cash income.  And then there’s that thing about extinction of thousands of species from the earth, forever.
And then what about what you’re missing out on?  The inner development of your person and spirit that comes from more conscious living, and doing it by yourself.
Maybe living more intentionally is not such a difficult choice after all!
Posted by Andy Couturier