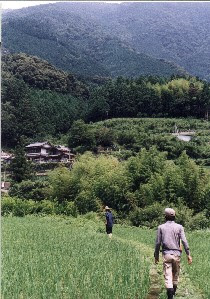 Today I have re-started the process by which many of these articles were made: listening to the recording, rewinding, listening, typing mixed notes in Japanese and English, and adding occasional reflections. It is SLOW. So different than freewriting in the workshops I lead. Yet as I extol slowness and non-efficiency-driven processes, it is right that I should practice them.

Today was work on Wakako Oe. She is a philosopher. Yes, gardener, woodcarver, maker of botanical sculptures, translator of the writings of Indian saints, with her husband Masanori, but below that, a philosopher. Today I translated, her words " 'To disconnect from the flow of time,' what is that?"

She lets her conversation roll out contemplatively, recreating the experience of thought, the slow turning over of ideas.

Also I found an old document that gives an overview of what the project is about. Some things there I discovered: "choosing of restraint in consumption of resources, but not for moral reason, but because the act of limiting actually enriches each moment of life."
Posted by Andy Couturier