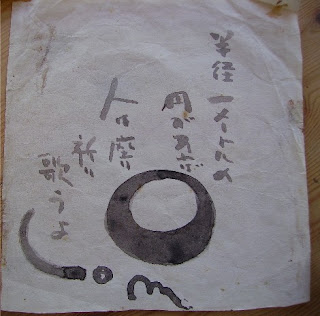 Doing just scraps here from a 1999 interview. Listening really closely to the recording, rewinding, listening again. Sometimes getting words, sometimes getting a feeling, and trying to render it into English. Nothing cohesive yet. Just fragments. Look up a word in the dictionary—is 'utsusu' meaning reflecting or copying or duplicating here? Then going to the English thesaurus, finding words for 'wanting'. I fall into the spell of how I love to hunt around and start to work sentences. Here are unprocessed scraps. A couple of hours work this morning. I yearn to do more.
~~~~
"So with absolutely nothing there (on the paper)… it's not about, 'what do I want to draw?'—though of course, inside of one there is something that wants to drawn, I don't know what it is—but just about making oneself completely empty" …. pause, breathy, listening carefully, breath held, as if on the edge of something … "A! at the instant the feeling becomes…just so… then, holding the brush, in one instant…draw it, utterly…can't turn back.
"Then, looking at it, huh? What is this thing? Even myself, I don't know, looking at it … being in that kind of world. She renders that very moment of discovery, her voice like a string being pulled…more and more taught…the pause…What is it?

"And then, recently I've been going to (osawattari) sit at the feet of my mother in law and learn to carve puppet heads. But not just only in the formal bunraku puppet style, I start to think…huh, but this is an interesting face, I'll carve something like this. Then I'll bring it into this veranda area, and just arrange things around. I want to make a 'space' here for art making, for painting, but I keep collecting vines and plants from the mountains, and as the seasons change, I put them here and there…I never finish!" She laughs again at herself.

"It's not like I am, myself, building or creating pictures/paintings, it's more like there comes upon me a feeling, like I just want to draw, sketch. The feeling as if the yearning to draw appears/becomes … dancing is the same."

Recently, she says, she's been working with the juice of the persimmon, the astringent variety, green. She tells me that as time passes, the color displays itself. I think of hours, perhaps days. She continues, "for the first year, there's no color… then, gradually…"

I just translated this poem/calligraphy. I tried to describe it, but my consciousness isn't there yet. I'll wait for later. Something about the color of handmade paper, and the different thicknesses of India ink, something about the patterns and the white spaces, about the shape of the circle.

Here's (one of) the translation(s):