What inspired Mr. Oe to make woodblocks like that? 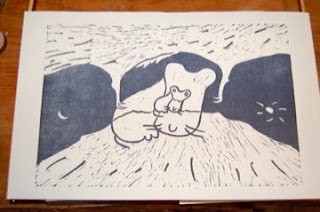 How did Mr. Oe learn to make woodblocks like that? What were his inspirations?

I didn’t ask that question to him directly, although I talked to his wife Wakako a lot about her improvisational painting method (Chapter 7), but I have some ideas. The image here is from a hand-carved woodblock print from his translation of the Native American tale of “The Jumping Mouse.” In this image, the mouse is dreaming on the mountaintop after his pilgrimage away from the busy, small-minded world of the other mice.

Masanori Oe’s writing deals a lot with what it is to become part of the "dream" of the entire universe, and he says that we are all part of the universe’s dreaming. He draws influence not only from Native American thought, but also from Australian Aboriginal theories of “dreamtime” as well as from his time in the late 60s in the US as a experimental documentary film maker. He worked with Timothy Leary and his “Psychedelic Celebrations”. Masanori’s father was a traditional wooden puppet carver, and he studied sculpture as a university student in Kyoto.

So I would guess that his inspirations come from all these different areas of artistic expression. Perhaps I’ll ask him the next time I visit. Thanks for your question.