What results from a fluidity of mind? 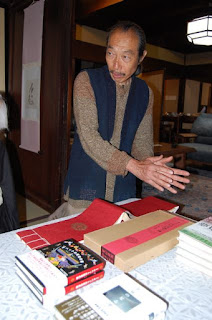 Amy R. of Oakland California asks:
I was curious to read in Chapter 11 that Masanori Oe traveled to the U.S. to study film making intensively, but readily gave up the medium at a later point in his life for one that better suited his message. The chapter about him highlighted a fluidity (and a great richness) to his life; he's been deeply involved in so many different pursuits, it's incredible. Do you think the broadness of his pursuits is related to "the liberated mind not creating boundaries" (on p. 307) that he speaks of, not "focusing on solidity" (even on the solidity of his own self-concept)?
Thanks for the question Amy. That's really interesting. I hadn't thought of that connection. (This blog is a great forum for me to learn more too). Yes, I do think his ability to shift shows the flexibility of his mind. I remember when I asked him about his shift, (page 298) he said that becoming a writer had helped him describe the logical aspects of thought, which film wasn't as good at. He also found that after 4 years of living in New York, returning to Japanese, his mother tongue, was incredibly pleasurable. So I think that indeed his ability to pursue his changing fascinations has to do with some of the liberation he had accomplished in his own consciousness.
Posted by Andy Couturier