You never know where a book will intersect a person's life. I found out recently that a martial artist who keeps a blog called "Prevail Training" just reviewed A Different Kind of Luxury. Chis, according to his website, is "a decorated law enforcement officer with experience in Patrol, Special Operations, and ... chemical munitions [and] has extensive experience in force tactics, modern close combat, and ... has also practiced fighting arts for nearly twenty five years. He holds a black belt in Judo and... has studied classical Japanese martial traditions, as well as traditional Chinese arts. "


Here's his review of the book: 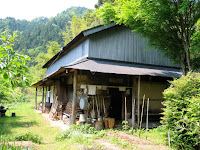 For Something Completely “Different…” The wife and I have been reading an interesting book ”A Different Kind of Luxury: Japanese Lessons in Simple Living and Inner Abundance” by Andy Couturier. It is an interesting book on a number of levels. These people, many of them traditional craftspeople/artisans, have chosen a deeply rural, “traditional Japanese” lifestyle which is in many ways iconoclastic in modern Japan, as they have chosen to unplug almost entirely from the modern economy and ideas of “achievement” and “success.” Few could live the way these folks do, but it is a very simple and “pure” way of life that offers something for today, if only as an illustration.

Much of the message is directly Buddhist, and directly “Green” in the modern sense, which may be off putting for some depending on politico-religious bent; others have some resonance for people interested in and practicing a traditional art (martial or folkway) in the modern world.

And here's Chris's response to a comment I posted. (I asked him about his term, "resilient community.")

I'm on Chapter 6 (Akira Ito). My wife and I keep having to wrestle the book from one another. If you like “resilient community” I’d suggest John Robb’s work, not only his blog but his book “Brave New War” (Wiley and Sons, 2007). More in the lane of terrorism and the changing face of conflict, but with some insightful thinking there. ... From a perspective perhaps worlds away from that of the people you profile, their examples of living would be a tremendous advantage in terms of “defensive living,” that is not being tied in to the “system” for sustenance and survival as so many of the rest of us are.

As for the perspective they do provide – if we lived more like [the way the people in your book do], we probably wouldn’t need to think about the things that Mr. Robb explores, or that I talk about on my blog.

Thank you for your work! My wife and I are raising a small child, and we were interested in the views of your friends in terms of their self-sufficiency. Having an interest in traditional Japanese culture and ways (particularly martial arts in my case), I was drawn to some of the ideas such as what I posted above as well.

Me again: In my book, I don't broach the topic of the possible societal results of us livings so non-self-sufficiently, but I do agree with Chris's implication that all our resource wars do stem from our addiction to a way of life that requires massive consumption.  Chris writes "few could live the way these folks do," and I guess I'd disagree.  I think we all can move in their direction, and, over time, live very close to the way the people in A Different Kind of Luxury are living.  In some sense, if we really believe that our current society is "unsustainable" then we are going to have to.
Posted by Andy Couturier