"I wish my house was even smaller..."

I just got off the phone with Nakamura, who I profiled in Chapter 2.  That may not sound that remarkable, but there's only about a week in every year that one can reach him at the other end of the phone, and that's when he's helping out at the annual spring cherry blossom festival at Tokurinji temple. He doesn't have a phone at home. 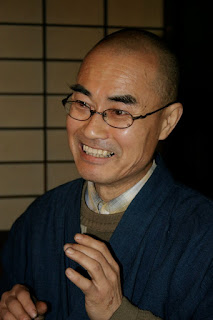 Since the book was published, Nakamura has moved from very small four room house to an even smaller place.  Here's a bit of the conversation.

Andy: "Do you have an irori in your new place?" [An irori is an open firepit in the middle of the living room floor, which was one of the distinctive features of Nakamura's old house, and which I describe in the chapter.]

Nakamura: "No, there's no room for that in the new place."

Andy: "Are you satisfied with that?"

Nakamura: "I didn't go looking for a house in which I can have an irori, I looked for a house that was available, and then I looked to see what was possible there.  In fact, I'd like to have found a place that was about a third the size of my old place.  But I couldn't find that.  Even the new one's too big, about half the size of the old one.  It would be much easier if it were smaller.  The bigger the house, the larger the roof, and that means more maintenance. So I wish I could have found one even smaller, but that wasn't available, so this one will do."

He then went on to tell me that the old house was originally a residence, but the new one used to be of a kind of work shed, [though more sturdy than what we would think of as a shed] and the place where his new cookstove is now used to be a stable for a cow!

Instead of Nakamura needing more and more comfort as he grows older (he just turned 60), he wants to live with less.  The word he used to describe this was "raku" which means "ease, simplicity, lack of trouble and bother."
Posted by Andy Couturier