How have they changed over the years? 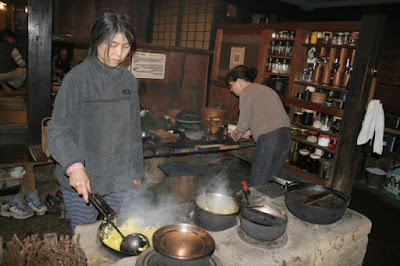 Jeremy Hunter from Los Angeles CA asks:
Dear Andy,
I've been reading your "Luxury" essays for a long, long time now...first in the Japan Times, then on your website and now in the book that I'm delighted to see finally published! I bought 6 copies already and have presented them to enthusiastic friends. I can't keep my own, because somebody always wants to "borrow" it, so I just give it to them.
My question is since many of the essays were written years ago, how have the people whom you've profiled changed and evolved over time? I assume that you keep up with them. I'm curious to know if you've noticed interesting patterns with them.
Since you emailed me your question last week, it has been such an interesting thing to consider for me. Hmmmm. I think the most interesting answer to me, when I think about it deeply, "They haven't changed very much at all!" (How strange in our change-addicted world!)
There have been some surface changes, perhaps: Nakamura-san (chapter 2) lost his lease and had to move to a different house, one valley over. I haven't visited him in his new place, but I bet he's living in much the same way. Atsuko, (chapter 3) may not be quite as confrontational as I describe in that chapter where she is shouting at the nuclear power official after the big nuclear spill. Wakako (chapter 7) is now emphasizing her puppet carving more than her painting and calligraphy. Yamashita (chapter 9), as I describe there, has had a demotion of sorts (though he doesn't think about it that way) from working as school teacher to working as a tea-plantation laborer.
Yet--and this is what's so surprising--none of these changes seems to have affected their value system and outlook, or their way of life at all. There is such a sense of being in this for the long term.
While I would hazard that this is an aspect of Japanese society in general, I think, again that the rooted nature of their choices makes flitting changes unnecessary, even a distraction. As Murata the bamboo flute player says on page 131, "The 'true sound' can't be found in one or two years. Ten years is not enough, twenty years is not enough. The real thing takes a minimum of thirty years."
Their values and their beliefs have stayed so steady over time, and this is not just a coincidence. Their values are to keep at something for a long time. Nakamura mentions that Thoreau only lived at Walden Pond for around two years. "It's more like he moved there just in order to write that book. But someone needs about ten years, I think, to understand a particular way of living. Thoreau seems like he was more of a tourist." (!!)
And now, I myself, would like to try to be more like this. To be less of a 'tourist' through life.
(Also, just a note, that while I started seriously writing some parts of the book in 1998, what you see in the final book reflects the state of their lives up to the very last revision of the book, which was summer 2009, so, at least for now, they're not such historical documents.)
Posted by Andy Couturier