"Time is a recurring theme in your book"--With Excerpts

Journalist Aneli Rufus asked, "Time is a recurring theme in these chapters. How did your perception(s) of time change as you lived in Japan, and came to know these people as you wrote about them for this book?"


I answered her question, and included several excerpts from the book.
I think the main thing I understood was how I was making myself miserable around time simply because I was trying to pack more things into my days than was actually possible.  (And I certainly haven't yet solved this problem in my own life!) 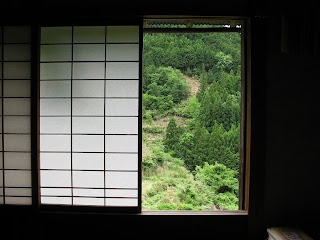 Chapter 2, on Mr. Nakamura, really speaks to this issue quite a bit. Here's a man who does almost everything by hand, and yet he seems to have so much time.  As he says:

“If you have time, a lot of
things are enjoyable. Making this
kind of woodblock, or collecting the
wood for the fire, or even cleaning
things—it’s all enjoyable and satisfying
if you give yourself time.  Humans have a tendency to
create a visual image in their minds of what they think they can accomplish in a particular period of time—say in a day or a week or a year. But one thing I noticed when
I first came here was that there was a gap between that
image and the amount I can actually accomplish. I felt
ill at ease and irritable all the time. I eventually learned,
however, to adjust my imagination, and plans, to what
was actually possible.”

Perhaps this is another way that Nakamura keeps his
presence so calm: by reducing the number of plans he
makes so that they fit easily into the time he has available,
instead of trying to accelerate his life to accomplish a long
list of projects. And, I speculate, maybe he has come to
this understanding of how to live a satisfied life precisely
because he has set a pace slow enough to observe the processes
of the mind.
When I compare his absolutely simple, almost bare, existence to the sophisticated level of his thought, I admire his decisions about
what to prioritize in life. For all the time he spends cutting
and gathering firewood, growing food, carving woodblocks,
cooking, or just gazing into the fire, it doesn’t
seem that his intellectual life has suffered in the least. It
is as though the mastery he has achieved as a craftsperson
suffuses all the other spheres of his life.
Another change in me I noticed was when Atsuko (chapter 3) said to me:
"It is like what Rousseau said, Il faut cultiver son jardin: You must cultivate your own garden. They say that ‘A rolling stone gathers no moss,’ and I wanted to have some moss.”


“Thoreau only lived there for a
little more than two years. It’s more like he moved there
in order to write the book. But someone needs about ten
years, I think, to understand a particular way of living.
Thoreau seems like he was more of a tourist.” 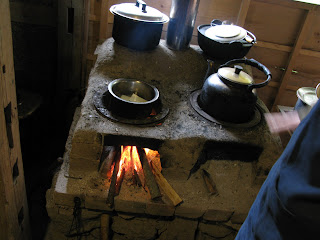 In Japan in general, there's an assumption that if you want to be good at something, you have to put years and years and years in to that.  I think we Americans, and I include myself, childishly want to be experts right away.  Here's another passage that speaks to that, from chapter 4 on the Zen bamboo flute player Kogan Murata:
Then, contemplatively, Murata tells me about searching
for “the true sound.” Although he says he’s never heard
it, he believes it exists, and that looking for it is the real
work of the bamboo flute player. “The true sound can’t
be found in one or two years. Ten years is not enough,
twenty years is not enough. The real thing takes a minimum
of thirty years. That’s why you have to be mad. You
have to give it all your heart, as my teacher said, otherwise
it’ll never be the real thing.”
“But,” I ask, “what is wrong with doing it as a hobby,
a part-time thing, after getting home from the office
or something?”
“You wouldn’t understand at all. Better forget it. It’s
a waste of time. It’ll never be the real thing that way.”
I’m not sure I completely agree with Murata on this,
but perhaps I am thinking inside my own culture’s tendency
toward dabbling. And, after all, isn’t turning away
from “just messing around” what mastery means?
I'll also say that I learned from Nakamura that when you put a lot of time  and care into something, it gives back to you later, again and again:
And yet as Nakamura starts to explain to me the painstaking
process of sewing the cover on a book—how the cloth has
to be tucked in at a certain angle under the paper, how
the cover should extend just one millimeter beyond the
stack of pages—I still wonder whether it’s really necessary
to be that careful. 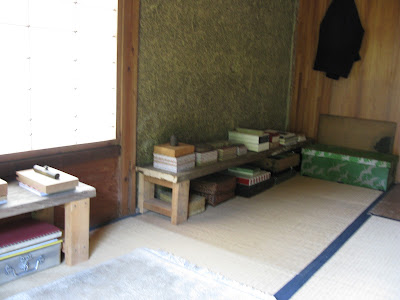 Nakamura’s answer is simple, and clear: “If you make
it this way, every time you look at it later, it’s an enjoyable
experience.” It is almost as if the energy he puts into making
something remains stored in the object and feeds his
spirit every time he looks at it or touches it.
I certainly have found this with my own book, with how much time I put into it.  It's really so satisfying for me to re-read the sentences of my own book, and that may be because I put years of care into writing the book.


I think about a lot of journalists (and I don't blame them for this, because it's the situation of their jobs)  who parachute into a foreign country, get an interpreter, ask some questions, and then file a story on deadline.   And then the world of Western readers bases its view on that "foreign" place on this supposedly expert person who has "been there".  While I know this circumstance is a function of how much time the journalist is given by their agencies,  isn't it a shame?  I think of my own half-baked theories I had about why people behaved in a certain way when I was in Japan for 4 months and how they were totally shattered  by one year in, and those again were proven wrong when we'd been there two or four years.
I finally got how really understanding another culture, or anything for that matter, takes much much much more time than we Americans are accustomed to--or even willing to-- give to it.
Posted by Andy Couturier