Put your body in the situation, and wait for your consciousness to follow

I got an email this week that said, in part:

I would like to read a book that maps out how to forget about pizza delivery, commercials,  convienence, and embrace a different frame of mind. I don't want to see a Youtube of a small house with a woman performing as a Zen master cooking one pot meals. I need a book that clearly defines the core values and practice necessary to live a sustainable life and not feel deprived. I don't mean another homesteading book about building mud houses, raising chickens or growing a garden. I mean an exercise book for the mind to learn how to create an artform of living a sustainable life. To learn how to see the completeness of daily living, even if our lives have always felt like so much unfinishedness.

I really appreciate such emails, and it is the core question of the book, perhaps.  I believe that many of these values are woven in to the fabric of A Different Kind of Luxury, and I want to suggest to people to just read the book, to read it slowly, and let the messages percolate into you.  Taking time to read the book is actually taking part in the process.  I didn't want the book to be a how to book.

Part of the answer however I touched on in directly in the book, when I wrote:

Nakamura now goes into another room and brings out a book, Rhythms of a Himalayan Village. [by author Hugh Downs] “This book was written about the village where I lived,” he says, pointing to a black-and-white photograph of a misty, barren mountainside with several mud-and-tile houses scattered along the ridgeline and distant snowy peaks towering in back. “This is the monastery where I studied wood-block carving, and,” he turns the page, “this man is my teacher, Tapkhay Gendun.” He points to a photo of a monk sitting by a window, his face lined by years of cold-weather living and meager conditions.

Paging through the book, I lose myself in its beautiful photographs juxtaposed with quotes from the Sherpa villagers and passages from Tibetan Buddhist scriptures. As I read, I begin to sense how the villagers’ way of living, in its utter simplicity, could give Nakamura a physical, bodily understanding of how to live a life of reduced desires and reduced consumption when he returned to Japan.

“It was because I saw the Sherpa’s way of living, and had lived it myself,” says Nakamura, “that when I came to this valley here in Japan and first saw this house, I knew I could live in the same way right here.” 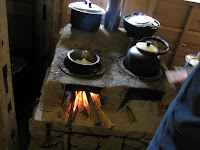 And this hits on another question I received, when giving a lecture on the book to a group of Japanese women in an English class, and one asked: "But do you have to travel to some foreign country to learn to live like that?"

To which I answered, "No, of course not."

But, that's not totally correct.  I DO think you have to try out living on less, a lot  less, to "get used to it" even if it's uncomfortable at first. That can be accomplished by travel.   My partner Cynthia said once "Being comfortable is an utter religion in the USA, and no one can break that strict religious doctrine by suggesting that comfort isn't the ultimate value."

My friend Steev, however, spent 3 years living in the forest behind a university campus, and snuck into the woods late at night, living under a tarp in the rain or the cold, and now he can live within any means at all.  He experienced it with his body. Or to say it another way, he put his body in the situation, and waited for his consciousness to follow.

Part of me wants to suggest to the emailer that she begin to make up her own book of exercises for the mind.  My partner Cynthia said, "She's already on the way to writing this book herself!" (Perhaps people want to write to me and give their suggestions, and I can put them up on the blog?  andy [at] theopening [dot] org ).
Some obvious ideas to try, if you ask me personally: stop watching all TV.  Give up on spectator sports at least.  Read and write more.  Do physical work with your body, making real things, things that can be used.  Spend more time outside. Move to a smaller apartment.  Look at your budget and cut things out.  Stop spending time doing things that don't feed you. If you just don't order pizza delivery for 6 months, eventually you will forget about it.

But now I am getting a little bit "how to", which I said I wouldn't in the book.  I think it's really about each person making up their own regimen of things to change about their lives.  Changing is hard.  It can be done.  It feels good.

If you want to learn about that kind of change, here's another suggestion: visit my new colleagues' website: Create The Good Life.  Because Eric and Beth are doing exactly that: helping people design a better life for themselves by slowing down, considering their choices more deeply, understanding their own personalities, and learning how to help others.  As they say:

But I also want to say to the emailer that those videos of women making one pot meals ARE a help, a pointer in the right direction, and those books about raising chickens and growing a garden are part of the solution too, but you have to try some of these things, and even if they aren't more convenient, or well advertised: they might help you along the way.

Nakamura brought up this very thing when I saw him last month.  He said:

"What the people in the Sherpa village were experiencing was not something you could see visually, easily, with your eyes.  It was something about the interior life, very much so.  Of course, if you go to these villages and look, you can see what things they have, or how very little they have.

"I could see that they were living a life centered around firewood.  I also observed, wondering—you know how cold it is, and all the other difficulties—I wondered, what is the enjoyment in living this way?  What is the flavor, the taste of this way of life, that they enjoy?

"Growing up in Japan, or living here as a young adult, I might have had many situations to understand what I came to understand while traveling, but I did not come to that understanding.  Maybe I could not have.  It was only while in another country that those kinds of situations had the power to really impact me."


I asked Nakamura, "How did you eventually perceive it?"

He replied, "It was not until I came back here to Japan, and found this place, and started living this way that I thought, 'Ahh, that’s what this enjoyment is.  This is the flavor, the richness.'  You have to live it yourself to understand." 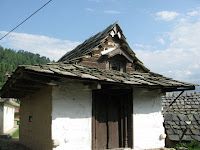 And then he said to me something wonderful, "To have more time than things to do in that time, that is to say to have plenty of time: it is a very rich kind of feeling." 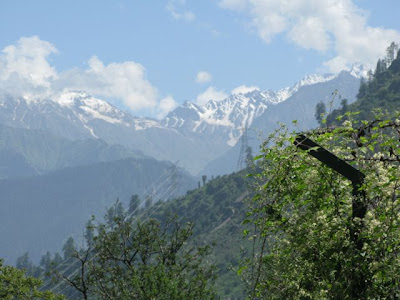