"I am practicing being talentless, but I find it very hard to do"

Potter Gufu Watanabe spoke to me about his ideal of achieving a flavorful line.  Read more about him in Chapter 8.

Here are some of his illustrations, from his hand-painted New Years cards that he sent me.  Beautiful as these are, the ideas and philosophy behind them are even more amazing. 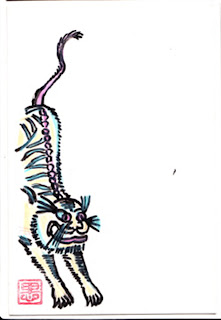 "I'm practicing being talentless.  But I find it almost impossible to do. If I could actually get bad at it…but to imitate being bad at it, that just won't work."  We both start laughing.
"Those pictures from a thousand years ago in Persia came out of the life of poor people then.  So if I lived a similar way, then maybe I could draw such pictures, but I…I live in Japan.  I grew up poor, actually, but all around me, the culture was at a sophisticated level.  That's why no matter how I try, I can't draw a picture like they did. 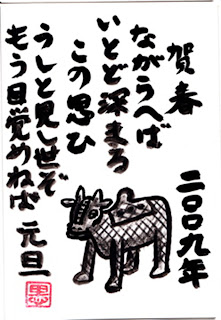 "My goal is to draw a line with some 'flavor' to it.    But somehow, I just end up drawing a clean and pretty line, that is to say, a boring line.  I have to destroy that habit."

A flavorful line.  Such a small thing, but such a big thing if you are trying to make good art. 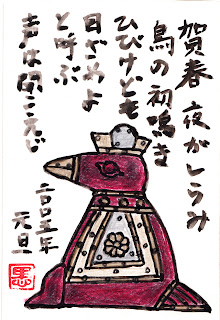