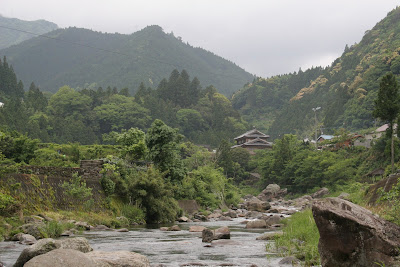 If you have enjoyed the book, posting a review on Amazon or on Goodreads really helps other people find the book.  Here are some recent ones on Amazon:

5.0 out of 5 stars Eleven Signposts: This Is The Way!,
As we make our way through life, we get guidance. The choices that eleven people made about what they could do to improve the quality and significance of their lives are set out in this book for you to consider. It will affect you deeply. Every time you read it, you will find some new insight into how you can change your life, for the better. When you are ready, a teacher appears.

5.0 out of 5 stars A Reassessment of Priorities,
This beautifully-written book is about how 11 people realized, usually through foreign travel and deeper investigation into different forms of Buddhism, that they could choose how to live their lives in ways that are far from the norm in modern Japan. Reading about them enables us to look at how we are living our days, weeks and years. Over and over again, Couturier stresses the fact that the greatest luxury of all is time. Slowing down, doing less and enjoying it more are some of the lessons I received from this delicious, luxurious read.
5.0 out of 5 stars In Tune with Life,
I read this book some time ago after seeing the author at a local reading. It was written, of course, before the nuclear tragedy in Japan but is all the more urgent and timely a book because of that accident. Japanese people, along with those elsewhere who rely on nuclear power for their society's voracious power needs, are asking, "Is there another way?" This book points to that way.

The author, who lived in Japan for four years and originally published the interviews in this book along with others in a series for the Japan Times, sought out a number of people who lived simple and happy lives. Mostly living in the countryside, they had dropped out of the frenetic Japanese way of life, instead preferring an abundance of time for contemplation and enjoyment. Each had a quite different story. Some were artists of various kinds, others were craftspersons, some gardened. Likewise, some lived alone, others had families. Some were off the grid but not all of them. But all shared a deep spirituality and sense of wonder that their contemporaries all too often lack.

The author and interviewer chose wisely and edited wisely as well. I might add that the book is beautifully assembled, with pictures that bring the people interviewed to life. If you are looking for hope that a different, gentler way of life is possible, read this book.

5.0 out of 5 stars Inspiring and Insightful,
I found "A Different Kind of Luxury" a delightful read. It helped me relax and open my mind to a completely different way of living that is more sustainable, rich and creative. Andy Couturier is an excellent word smith who crafts a delightful image for the mind by combining many different elements of style, much like a delicious meal of many savory spices.
Posted by Andy Couturier