Climate change and A Different Kind of Luxury

Think about it: 7 billion plus people on the planet.  Each with a yearning to fulfill basic needs: food, shelter, heat, clean water.  And then we have the indisputable fact that human beings keep wanting more. Every honest person sees this tendency in their own heart.  I just heard about a man who was building a 100 million dollar house because he hates Larry Ellison, a fellow software billionaire, and so he wants to build a bigger house than him.

It's easy to dismiss the rich as clearly insane in such examples.  But the question remains, how do we each, individually train our minds and adjust our behavior so that we can be satisfied, even deeply satisfied, with less?  Not a little bit less, because, you know, 7 billion people.  A lot less.

That's what the people in this book can teach us, if we take the time to listen, listen deeply to their words. And perhaps the beauty of their lives can provide the much needed, incentive to actually make the changes we must if we have any chance of not loosing all the elephants, or living in a war-torn world.  That's very very serious.  So we really need to change.  And lots of us, and soon.

Now, sitting with me, Akira Ito lets out just a little bit of his disappointment. “For the sake of money, and for the sake of ‘economic activity,’ people try to change things, products, works of art—everything—as quickly as possible. To win at competition, everyone tries to do this.

"Even though it is the nature of the universe to change, the ‘change’ originated by human activity is too violent. Floods of cars and airplanes, the acceleration of transportation, mass movement of merchandise, the forced cultivation of vegetables in all seasons, excessive lighting and air conditioning, and limitless information: the change is much too intense. The human body and spirit cannot withstand this kind of acceleration. This is what I hate the most.


“For the sake of this changing, the world is being ruined. And it is based in greed. I don’t want to get involved in it. It’s better to be poor.”


Now when he says "It's better to be poor," what he means is just living a very very simple life.  Not traveling very much.  Using motors less.  Finding fulfillment inside.  The training of the spirit. 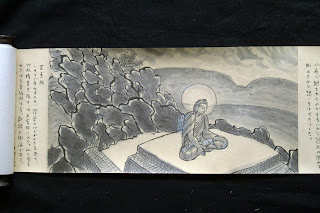 Is that the answer to catastrophic climate change?  If everyone did that, starting with you and with me, we could allow the people of Bangladesh to get what they need, their own "enough" and still keep a beautiful planet.  We need international agreements, scientific help, more efficient ways to provide for people, but the hardest part is simply using less. 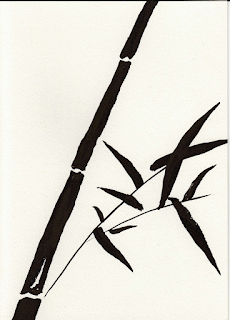 Last weekend, I took up Ito's suggestion, to learn Chinese style brush painting.  Beside the price of the pen, it cost me nothing. And it was deeply satisfying.  No carbon footprint.
Posted by Andy Couturier